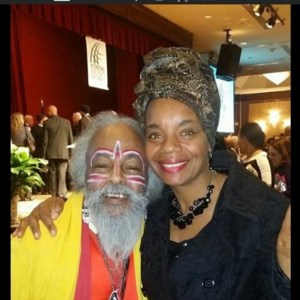 I was honored to be a guest at the 55th Anniversary of the lunch Counter Sit Ins which started on February 1 1960 in Greensboro, NC I met one of the Greensboro Four Mr. Jibreel Khazan He Gave me his bio so Here it Is Official

A brief biographical sketch and statement of

Apostle Dr. Khazan received his basic education from the Greensboro public schools. As a member of

the crown and scepter and national honor societies, Jibreel received an academic scholarship to attend

North Carolina State A&T. University where as an honor student and president of student government,

he graduated in 1963 with a bachelor of science degree in sociology and social studies. He has

field of education, voice at new England conservatory of music, and recently, he received the

Jabrille has served as a tutor/counselor for Rodman job corps center, minority history teacher at OIC,

counselor for CETA. Jabrille has taught a pilot course on African American history for the New Bedford

Massachusetts public schools, worked as program assistant for adults who have learning handicaps.

Jabrille enjoys being is a mass-star storyteller, oracle, oral historian, and lecturer. As a youth, he was

active in church and community affairs, such as the NAACP youth group.

On February 1, 1960. National freedom day as declared by president Abraham Lincoln in his support

for, the passage of the 13th amendment to the US. constitution (abolishing slavery, January 31,

1865). Jibreel along with his freshmen companions. Dr. Franklin E. Mccain, Dr. Joseph A. Mcneil, and

Dr. David l. Richmond. Initiated the daddy/mother of all civil and human rights action in the USA. for

the decade of 1960.” The “four freshman”, staged a lunch counter “sit-in” demonstration at the local

F.W. Woolworth’s lunch counter in Greensboro. NC to protest the gross denial of equal service to all

customers based solely upon racial characteristics. The “sit-in movement” was the first of its type

initiated nationally by African – Ur-Asian males, and spread to at least 250 major cities and towns in

America in which over 400 demonstrations took place by the end of 1960. Millions of Americans

joined this movement for equal rights.

commission ruling in September, 1961, against racial segregation on interstate carriers and terminals;

all People in New Bedford, Massachusetts in 1921. Before he transcended this mortal life on January

12, 1960, Bishop “Daddy” Grace Prophesied. The grace of God shall come soon to deliver you from

the yoke of bondage and oppression. Pray for the anointing power of the Holy Ghost. You shall be

were going to request equal service for all Americans at F.W Woolworth’s lunch counter on Monday,

mystic shrine, and millions of Americans for, “helping to set the captives free.” God sent us. We

fulfilled the prophecy.” All praises and thanks are due to our life giver for “God’s amazing grace”.

A diverse group of people gathered at the Koury Convention Center to commemorate the 55th anniversary of the lunch counter sit-ins which began on February 1, 1960 at F.W. Woolworth in downtown Greensboro. It was on that day, four freshmen from North Carolina A&T College (now North Carolina A&T State University), Jibreel Khazan (nee Ezell Blair), Franklin McCain, Joseph McNeil, and David Richmond defied the prevailing convention by sitting at a Whites only lunch counter and requesting to be served. That act of opposing segregated public facilities catalyzed the spread of lunch counter sit-ins and desegregation efforts across the South.

Today the former five and dime is home to the International Civil Rights Center and Museum which commemorates civil rights progress, not just in the United States, but around the world.
The Sit-in Gala annually acknowledges the courage of the A&T Four and celebrates the people who helped dismantle segregation. This year the museum recognized four humanitarians for their respective contributions to civil rights. Mistress of ceremonies for the event was Tracey McCain, news anchor with WFMY News 2 of Greensboro.

During this year’s gala, Bennett College alumna Roslyn Smith received the Sit-In Participants Award for her tireless efforts in advocating for social justice. As a Bennett College student during the late 1950s and early 60s, Smith was instrumental in the planning of the Greensboro sit-ins and the protests which her fellow Bennett Belles as well as other college students from A&T, North Carolina Women’s College and Guilford College would participate. Smith recalled it was her membership in the NAACP which enhanced her interest in social justice.

Rev. Dr. Howard A. Chubbs, pastor of Greensboro’s Providence Baptist Church, was the recipient of the Unsung Hero Award in absentia. Accepting the award on his behalf was his son, Howard of Atlanta, Ga. “My father doesn’t look to have accolades. He has always been okay with working behind the scenes,” said the younger Chubbs of his father.

Longtime Hayes-Taylor YMCA supporter and fundraiser, T.O. Stokes received the Lifetime Community Service Award. As he accepted his award, Stokes said, “God has allowed me to give my heart and service to my community.” Stokes recently raised $1 million on behalf of the Hayes-Taylor YMCA’s capital campaign.

A true trailblazer, Blount made history as the first African American physician to lead a Mobile Army Surgical Hospital (MASH) during the Korean War. As a Greensboro physician, Blount was a part of a lawsuit, Simkins, et al v. Moses H. Cone Hospital, et al, which led to the desegregation hospitals throughout the United States. He told the audience, “Let us not be so proud that we cannot learn to love each other.”

Introduced by Rev. William Barber, president of the N.C. NAACP and architect of the N.C. Moral Mondays Movement for social justice, Vivian was presented with the Alston- Jones International Civil & Human Rights Award. Vivian played an integral role in the sit-in movement participating in civil rights work throughout the South and Midwest.

Recalling his friend, King, Vivian said, “If Martin hadn’t been here, we would not have an African American president now… We couldn’t have had that movement had it not been for nonviolent direct action.”

Vivian recounted thinking about standing up for justice when he was a young boy. “You didn’t know what the battle was but you knew it had to come,” he said

The former Shaw University Dead of Divinity (Raleigh, N.C.) said, “We know that only love can keep us alive. I don’t care what your religion is… There are only three good ideas anyway – truth, justice and love.”

Giving Honor To Ezel Blair Jr. One of the original 4 men to protest in Woolworth